Okay, I just had to post this. If it weren't for Jon Stewart making me laugh through this segment I'd be punching a hole in the wall.

Posted by Arts in the Family at 8:37 PM No comments:

Here's what I have so far. It's feels pretty good finally getting started. More later.

Posted by Arts in the Family at 8:32 PM No comments:

This week has flown by as usual. It was peppered with a few family outings to the swimming pool, the mall (spent big bucks on kid's clothing) and to a really incredible place called the Natural Bridge Caverns. I'd been to it a couple of years before with a group of educators attending the World of Water Conference. It was an awe inspiring experience on both occasions. To think that for millions of years the caverns sat forming quietly in the darkness creating cathedral-like chambers, undisturbed for the most part, while the world above frequently altered it's appearance.

Upon entering the first part of the cavern, my son said, " I want to work here!", and I bet he will. My daughter was a little nervous at first then after a while she started to enjoy the sights. It was a seventy minute tour led by a lanky teen who led us through a very insightful exploration of the 3/4 mile cave system. If there's anything like it in your neck of the woods I recommend you pay it a visit. It's open year round so we'll probably go back in the fall.

On the illustration front I'll be working on some sketches for a proposed picture book on some Mexican folk tales. It's not a done deal. The sketches will be shown to the author and publisher to see if the styles works with story and will appeal to the kids. We'll see.

We had a chance to see the Ringling show up in Austin for free but had turn it down because of other commitments. Plus when it comes to seeing the circus the kids will want light wands, snow cones, etc.. If you multiply that by two it adds up quickly and we'd already spent so much this week. and quite frankly the Ringling show hasn't been living up to it's reputation for a few years. The acts are generic and the production values have seriously degraded. Our game plan is to save up for the Shriner show next month. They usually bring in a pretty good show like the Hanneford Circus or the Carden Brothers Circus.

That's about the size of it. Later days!!

Posted by Arts in the Family at 8:00 AM No comments: 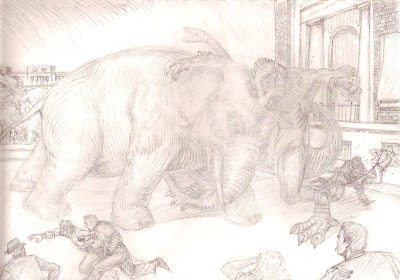 I'm on the verge of inking this drawing. No more fussing. Tomorrow I will sling some ink!

Summer is coming to a close very soon for our household with school starting for our kids next week. It was a good summer overall but it wasn't as productive as I would have liked it to be. I'm the type that needs to be working regularly in order to feel good about myself. If I'm not working I start to think. Thinking bad. Drawing good.

Unfortunately things have been kind of slow around here so I've busied myself making pieces for my portfolio and others for exhibiting at comic book type conventions and other related events. So far so good. I've got a few pieces I'm happy with and will hopefully sell. It's a long shot at best but it's a worthwhile one for myself because ever since I graduated with a Fine Arts degree in 1988 I've been trying to work as a fine artist when I should have going after the commercial art brass ring.

Actually before graduating from college I applied for admission to the
Joe Kubert School of Cartoon Graphics and Animation and to my utter delight was accepted. I remember speaking to Joe Kubert himself over the phone prior to being accepted. He wanted me to be dead certain I understood what I was getting myself into when I'd go to his school and I did. But as luck or karma would have it I couldn't raise the money to go. That was a major bummer.

I think it was meant to be, though, because had I gone that route I might never have met my wife, raised a family or gotten into acting or the circus; my life would have been radically different. I think I would have done well at the school and had a fine career in the comic art field but I would have missed out on a lot of wonderful things. Besides I'm not dead yet. I still intend on trying my hand at making my own comic book.

I consider the last twenty three years (Oh, man!) as the best times of my adult life which have given me many wonderful experiences and memories not to mention a great family, plus, as a bonus, have provided me with enough material to explore and inspire me for the rest of my life. The adventure continues!!

Did I just digress or what?! Back to work, kids and thanks for letting me ramble.

Posted by Arts in the Family at 1:57 PM No comments: 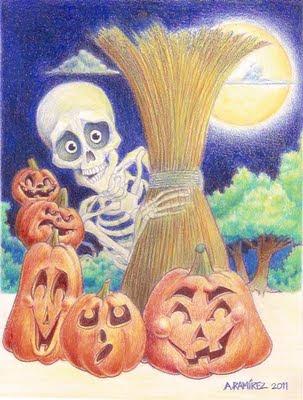 It's probably a little too early to be counting the days until Halloween but we here at Rancho Ramirez feel the holidays fly by too quickly so by all means let's get an extra- early head start. The Halloween decorations started showing up at the Micheal's Art and Craft store a couple of weeks ago and we couldn't have been happier. Is it excessive commercialism? Sure! But we never lose sight of the fun that Halloween is all about. Happy, happy, joy, joy everyone.

Posted by Arts in the Family at 6:59 PM No comments:

From Way Back When: Fleetwood Mac - Say you love me Live 1977

Posted by Arts in the Family at 4:08 PM No comments:

Email ThisBlogThis!Share to TwitterShare to FacebookShare to Pinterest
Labels: 1970's, Fleetwood Mac, From Way back When, music 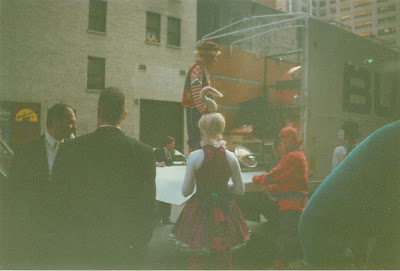 In April of 1995, when we were playing New York City for four weeks (Yahooo!!), our entire clown alley was hired to perform on the Late Show with David Letterman. Pictured above is the truck parked by the freight doors at the Ed Sullivan Theater, full of all our clown toys (juggling equipment, rolling globes, unicycles,etc.) that we'd be using for the evening. All I needed was a frying pan and me.

That's Lisa Simpson with the white, question mark curl and Benny Schultz next to her. On top of the truck stands Greg May, one of the best clowns the show had at the time.

We had about thirty seconds after David Letterman cued the band to come out running to do our thing. I did a variety of pratfalls and dove into the audience and ran amuck until we all had to go backstage until our next cue. That theater is teeny but they way it's shot gives it a huge appearance. 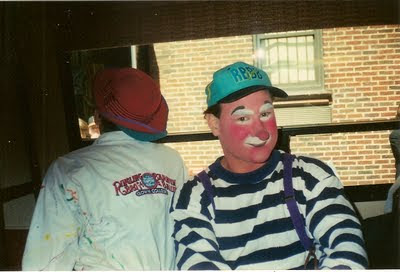 On the left and facing away is Arron Schettler and next to him is Mike Simpson. 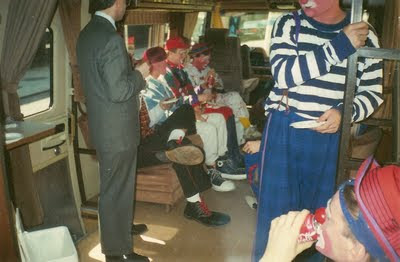 The greenroom was way too small to accommodate eighteen clowns so before the show we waited in an rv that was parked outside the building. Just before air time we went inside the theater and took our places in the various nooks and crannies available to us. Four of us, including Chad Miller and I, were in this tiny, narrow room upstage stage left of Letterman's desk that had a small counter top with a coffee maker and a door that led directly onto the stage floor.

Michael Simpson waited next to this. It looks like rigging for drops and curtains. 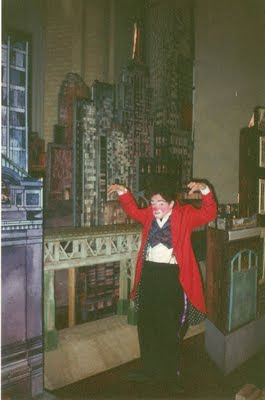 That's me next to the scenery far upstage. 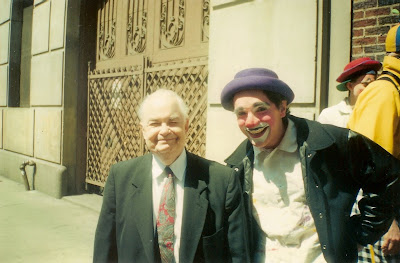 Chad Miller went right up to his desk during one of our moments on stage. Never tell a clown "don't do that" because he will. Luv you Chad! Personally I don't believe he doesn't like clowns because if your gonna have eighteen circus clowns all over the stage being themselves you'd better not have any problem with that.

That week the clowns each received a check for one hundred dollars for roughly a minute and half's time of work. I guess it was a little more if you consider the time we were setting up and then waited for the show to begin but really, that was the easiest hundred smackers I had ever made. We also got a copy of the show but I can't seem to find it. I was hoping to find something on Youtube but no such luck. Oh,well. I'll just keep looking.

Posted by Arts in the Family at 6:54 AM No comments:


Set a spell. Take your shoes off. Hooeeey!

Posted by Arts in the Family at 7:31 AM No comments:

Sunday Morning Matinee- Sinbad and the Eye of the Tiger (1977) 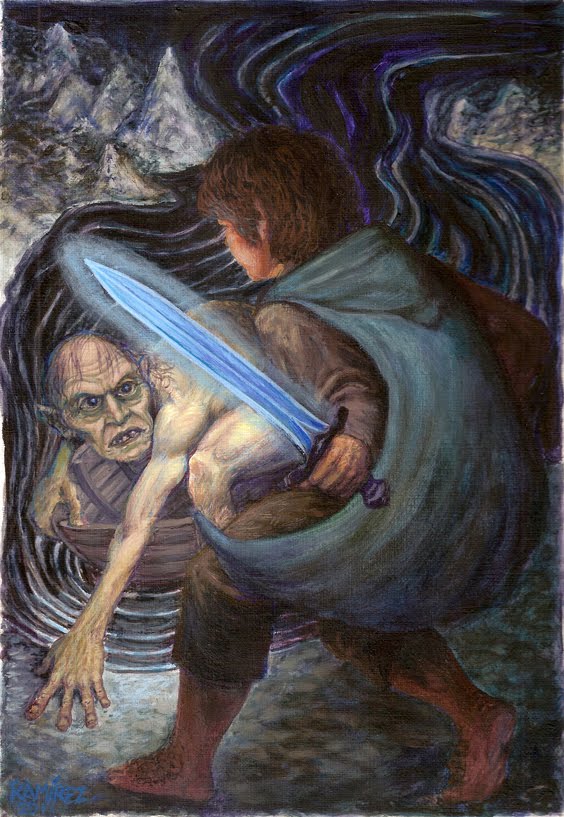 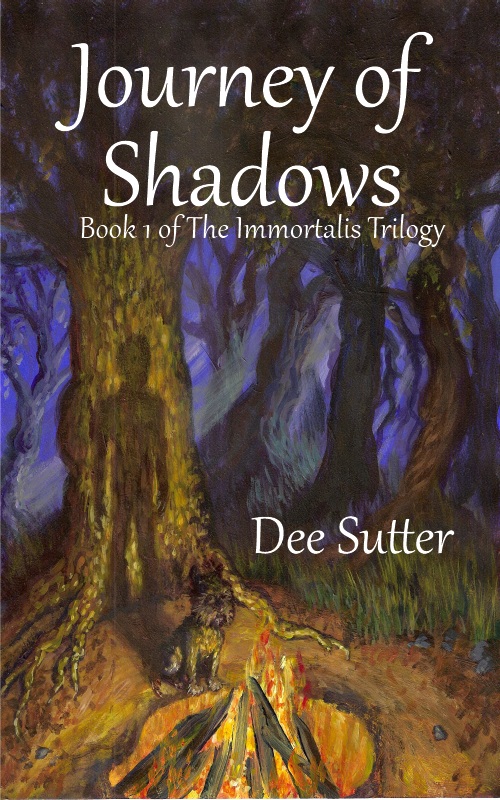 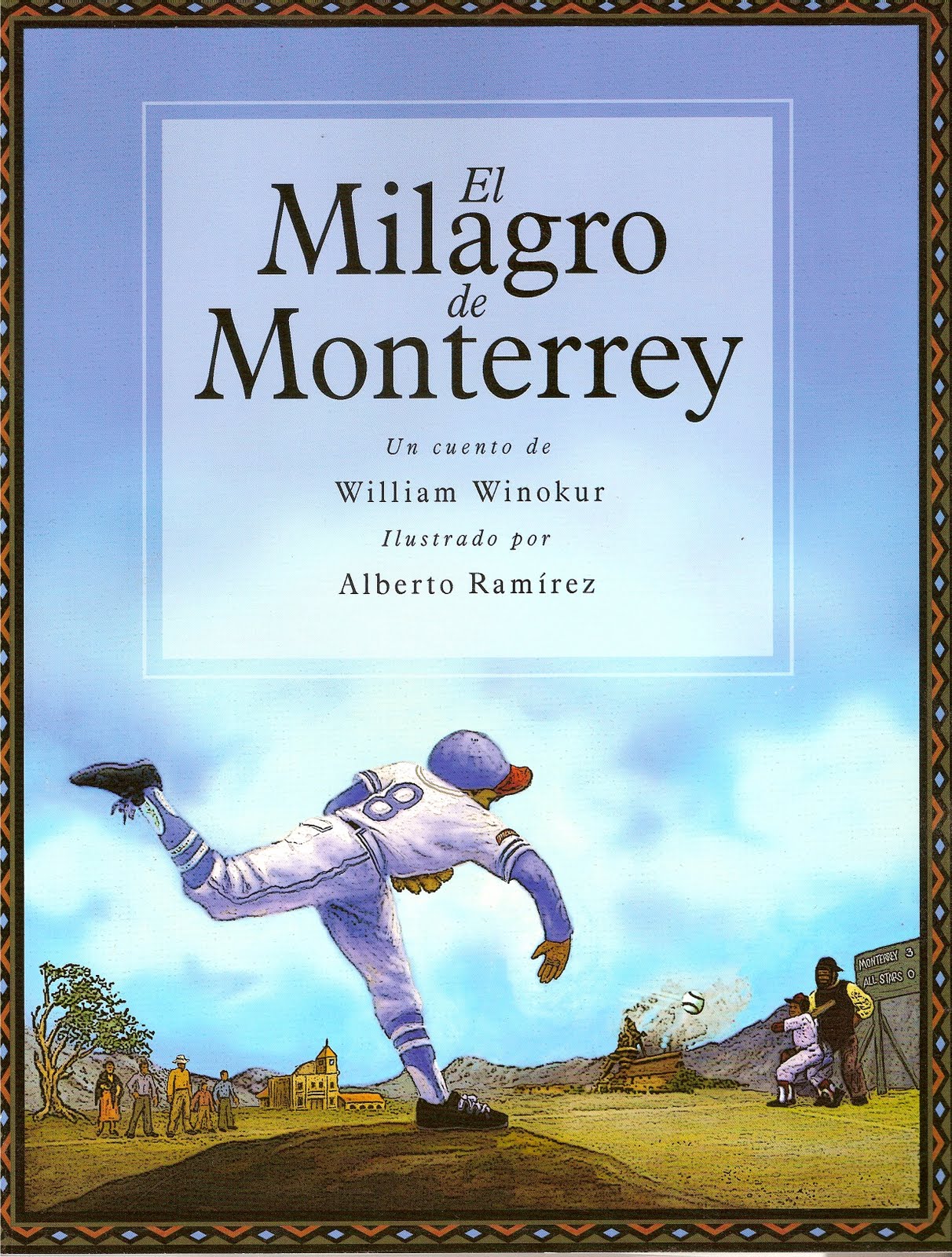 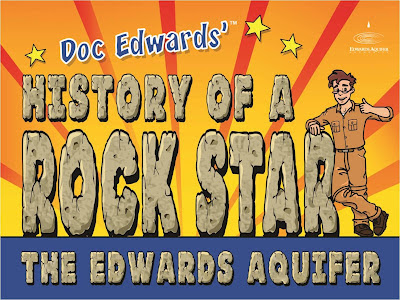